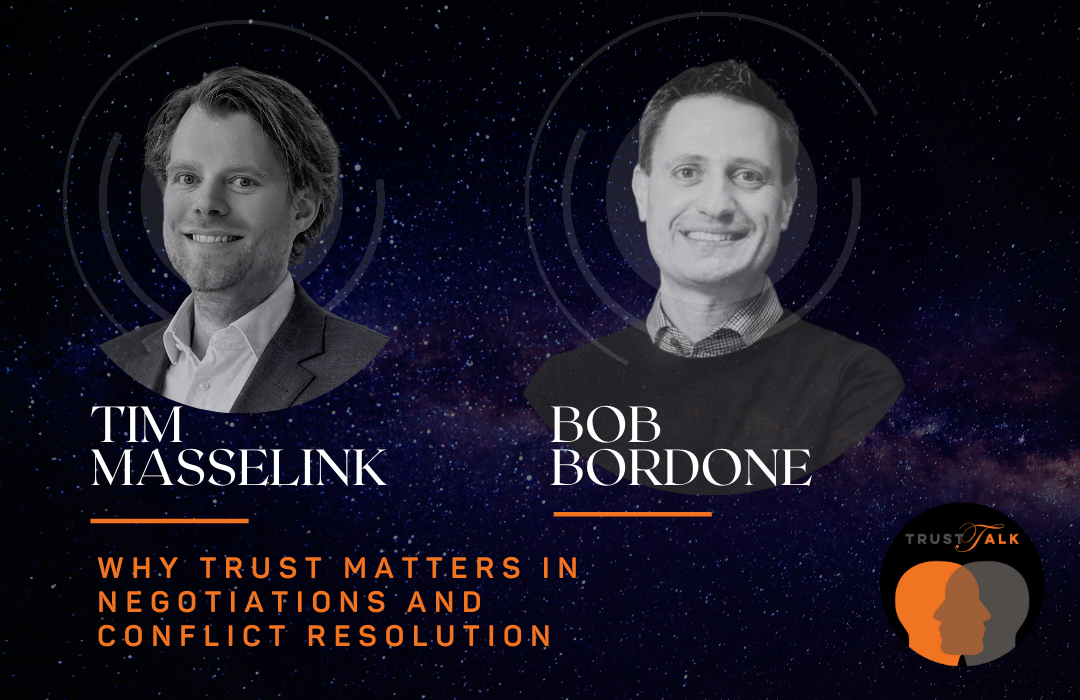 Trust in Negotiations and Dispute Resolution

Trust in negotiations cannot be easily understated. In this interview negotiation experts, Bob Bordone and Tim Masselink explain what it takes to build trust during negotiations. Negotiation includes any intent, any effort, any set of communications to influence or to persuade. So embedded under negotiation are things like dispute resolution or conflict resolution or mediation in my mind, because all of those tasks in some way are around trying to influence behavior. Negotiation is bigger than that. Negotiation includes both making deals and helping people resolve conflicts or helping people manage disputes in some way. What do skillful negotiators have to make them succeed?  The importance to create value with the other side: the more negotiators feel that there is trust with their counterpart, the less risky it is for any of the parties to share information about their preferences, the less risky it is for them to engage in a joint venture with them. The role of online or real-life meetings for the outcome of negotiations, the importance of being honest and predictable.

Bob Bordone on Risk and Trust

I think there’s a big connection between the two, of course, part of what you’re trying to do in a negotiation, right, is I think to reduce the risk of exploitation to yourself or whoever it is you’re representing, at the same time, of course, by dint of the negotiation, right, you are also trying to create some value with the other side. So one of the ways of reducing risk, right, is the more I feel that there is trust with my counterpart, the less risky it is for me to share information about my preferences, the less risky it is for me to engage in a joint venture with them. And, you know, one of the things I always say is when I’m teaching negotiation is that there are a lot of things in the world that we humans can’t control. And certainly, the last year has really shown us that, because if you would have said two years ago on your list of worries is a global pandemic, where does the global pandemic rank? I would have said it’s not on the list, right, so we know that humans, we can’t control so much. But one thing we have some ability to control when things and the world go bad, whether it’s a pandemic or a recession or a war or a weather event, is how the person on the other side of the negotiation table will act when these unpredictable things happen. And the more trust, the more we have a good relationship, the more we’ve worked cooperatively, the more I know that when something really bad happens, they’re not going to act, exploit me, but we’re going to instead act to try to be supportive and helpful of each other

Tim Masselink on trust and transparency:

you raised the point about transparency because it seems to be like something that is the highest objective almost at the moment. We like radical transparency and for negotiations, it just doesn’t work like that because people represent people. So you have to if it’s recorded, if it’s on camera, what will happen is that the negotiators, they will actually turn more towards their base, towards to constituents, then towards each other, because they have to look strong and ready for battle, so to say. And one thing that also comes to mind is in this age with a lot of virtual negotiations, which I know Bob also does a lot of work with, we recently had some EU negotiations with all the EU country leaders via virtual negotiations. And interestingly enough, they were basically completely useless, the negotiations, because people were not willing to compromise or to come together at all. And one of the reasons for that has to do with trust because it’s a bit cynical, maybe, but through ZOOM, or to any other program, you don’t know who else is in the room, for example. So you don’t know if we are in this call with the three of us, or maybe there is there are five other people standing outside of the reach of the camera

For the full transcript of the interview:


The video with subtitles is also on the TrustTalk YouTube channel

Literature and books mentioned in the interview

The Handbook of Dispute Resolution, by Bob Bordone and Michael L. Moffitt

Toponderhandelaars, by Maarten van Rossum and Tim Masselink (in Dutch)

Getting to Yes, by Roger Fisher